Sixmilebridge is a picturesque hillside village in south east County Clare. It derives its name from the bridge over the O’Garney river which flows through the village. Donough O’Brien, the 4th Earl of Thomond, built the present bridge in 1610.

From then, up to 1804 when the bridge at Bunratty was built, traffic between Limerick and Ennis had to pass through Sixmilebridge. The first element of the Sixmilebridge name derives from the fact that the village is approximately 6 Irish miles from Thomondgate in Limerick (the Irish mile being 2240 yards in length)

Sixmilebridge is architecturally attractive with three squares, wide streets, a green and the stone bridge over the River. Sixmilebridge is also a historical town that was once a booming industrial centre – at one stage it even had boats from Amsterdam arriving up the O’Garney River to the corn mills

The village is also fortunate in that many of the old buildings in the village have been preserved and have found alternative uses.

The former Church of Ireland church has been converted to an award-winning library, the courthouse is now a childcare facility, the market house contains auction rooms and the police barracks is now a credit union.

Each January a diverse band of musicians invades the village as it plays host to a colourful selection of singers, instrumentalists, dancers and yarn spinners for the Sixmilebridge Winter Music Weekend.

A unique feature of Sixmilebridge is the highly decorated but functional “duck inn” on the O’Garney River, occupied by a thriving population of ducks.

The duck inn is a floating, thatched raft with glass windows and painted walls. It houses the ducks during winter and is also where their locally consumed eggs are hatched and collected. It forms part of the tourist trail of Sixmilebridge.

View all towns in Clare 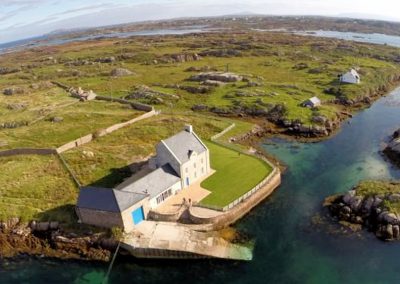 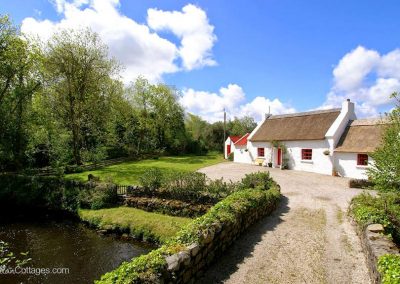